CHICAGO—The Honorable Minister Louis Farrakhan of the Nation of Islam  recently delivered a poignant, spiritually insightful message at the close of the close of the Holy Month of Ramadan, the annual Islamic period of daylight fasting, special prayers, acts of kindness and reading of the Qur’an—the book of scripture of Muslims.

The Minister’s message was also full of warning and guidance for all of humanity during these troubling times and culminated in the Muslim leader announcing his intent to deliver a major message to the entire world on July 4, commemorating 90 years of the establishment of the Nation of Islam with the coming of God in Person, the Great Mahdi Master Fard Muhammad, teacher of the Most Honorable Elijah Muhammad.

“That message if it is the Will of Allah (God), I will deliver it to the world on the 90th birthday of the Nation of Islam from somewhere in Chicago, Illinois or in Michigan; a message to the world, an announcement to the world,” said the Minister. “I say to you with deep humility from the 25th Surah of the Qur’an: ‘Blessed is He Who sent down the Discrimination upon His servant that he might be a warner to the nation,’” said Min. Farrakhan. The 25th Surah or Chapter of the Holy Qur’an is titled, Al-Furqan or The Discrimination/The Criterion, meaning to discern or distinguish truth from falsehood.

The Covid-19 pandemic has impacted the entire world, causing death, sickness, massive job losses, the crashing of global economies and has caused a halt to business as usual, and has affected people mentally, said Min. Farrakhan.  Everyone did not have the virus, but every aspect of life has been affected because of the virus.

This is not an ordinary virus and we will not get out of this easily, he cautioned. The country is divided and people are angry, the Minister continued.

“Well, this will be a warning not only to those of us who don’t even think that God is concerned.  But God is not pleased. He’s upset and He has taken so much abuse from people who abuse His law, His statutes, His commandments and abuse Him.  He now has come out of His place to deal with the inhabitants of the earth. So nobody is free from what is about to happen and what is happening.  And if it is the Will of Allah on the 90th birthday of Master Fard Muhammad coming to North America by Himself to start the Nation of Islam we will deliver that message.”

The special Eid-ul-Fitr message was delivered May 24 by Min. Farrakhan, concluding Ramadan. Eid-ul-Fitr, also known as the “Festival of Breaking the Fast,” is celebrated by Muslims all over the world marking the end of Ramadan and is observed over 1-4 days usually with major gatherings which include food, fun activities, gift giving, prayers and other festivities.

The Minister delivered another message on the Ramadan Prayer Line on May 10 calling the world and America to repentance as the Covid-19 pandemic ushers in global judgement. Min. Farrakhan offered incredible guidance to the world’s faith communities, any who would heed his words and, in particular, President Donald Trump regarding the need for repentance, prayer and humility as the world has entered a final period of divine reckoning, and a coming famine.

“The judgment is not approaching; it is present,” warned Min. Farrakhan in a heartfelt message stressing the power of Almighty God to ease the global burden coronavirus has wrought—on condition that the world and America turn away from wickedness.

He urged President Trump and Americans to follow the example of the people of Nineveh, who repented after the Prophet Jonah went to the wicked city, calling for repentance and the ruler and residents heeded his warning. God wants us to shelter in place to strengthen our relationship with Him, said the Minister.

The Ramadan Prayer Line is an annual program organized and presented by members of the Nation of Islam and includes Muslim scholars and leaders from across America, the world and different schools of thought. The Ramadan Prayer Line featured a guest speaker, historical commentary about Ramadan and the Hadith of the Day. The prayer line just completed its 14th year of connecting Muslims from over 50 countries who listen live and to the replays which are available on soundcloud.com/ramadanprayerline. Stay tuned for more information regarding Min. Farrakhan’s July 4 address. 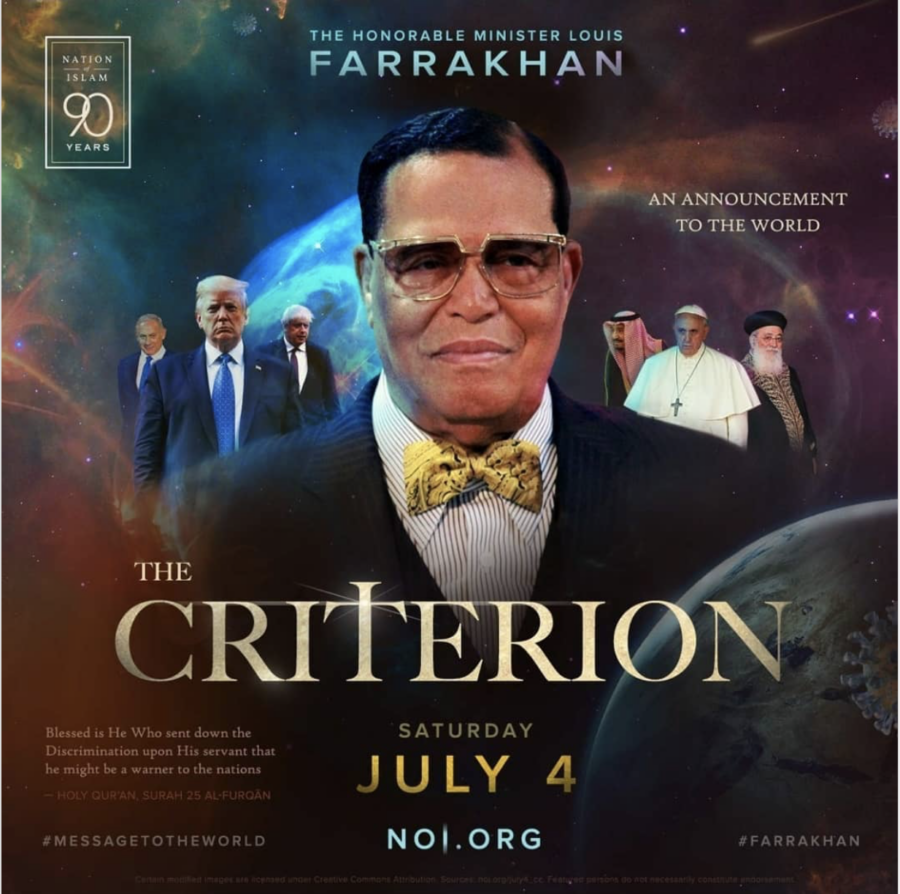